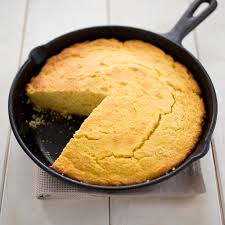 My mom used to make cornbread about once a week. My dad loved cornbread. I didn’t care for cornbread, or so I thought.

Growing up, we would have cornbread warm with dinner the night Mom made it. Of course, she made it in an iron skillet. These days, I keep waiting for lighting to strike me every time I make cornbread in a loaf pan or muffin tin. It’s just not right, but I don’t have an iron skillet, so here we are sacrilegiously eating cornbread in 2018.

The leftovers were covered with plastic wrap and set on the counter for snacks. Snacks for Daddy, that is! He would eat the rest cold with milk, like a cereal. He could never make up his mind whether he preferred warm, fresh-from-the-oven cornbread or cold, crumbled-in-milk cornbread. This would be his night time snack and/or breakfast until it ran out.

I hated cornbread. I’m telling ya, I’m surprised my parents didn’t do a DNA test on me growing up. I was so not like the rest of them. But did we have DNA back then? Well, you know the test? Probably not; I’m getting off topic.

The point is, I am older than DNA tests and I did not care for cornbread. Oh, I would occasionally try it warm with butter. Because, come on, surely with enough butter, you can choke anything down, right? Now, that I think about it, hate is too strong a word. If it was warm with enough butter and I wanted bread enough, I’d eat some cornbread. But I hardly had the appreciation for it that my dad did.

I learned there was something called sweet cornbread. I don’t remember exactly when I learned this, but I’m thinking it was when one of my sisters moved to Memphis. In Memphis, and most places in the South I’d learn, cornbread is sweet, period. See, daddy didn’t like sweet cornbread. Daddy wasn’t into desserts or sweets, at all. So, Mom, all those years, had been making cornbread WRONG! Well, she made it to suit my dad, unsweetened! (Like some crazies like their tea. That’s just wrong, too!)

Now, sweet cornbread, I liked. I’m getting myself all hungry for some good, SWEET cornbread, now. Cornbread is amazing….with sugar in it! I was so mad that all those years, I’d been choking down this…this… Gerald Lawrence brand of cornbread, bleck! I could have been enjoying sweet cornbread!

All it took was a new experience with something I’d had in my life forever. A flip happened. It’s those magnets again. Try and push them together one way and they are repelled. Flip, and they connect on their own.

When I recovered from ED, I had to flip how I saw food. A new perception. See, some addicts can just avoid their vice! …I say that like it’s easy; I know it’s not. But giving up food is not an option. Hell, that’s the whole problem for some! You still have to fuel your body. Same for the over eater. You can’t just walk away from the dinner table and never go back. You have to go back to the place where you over indulge.

Some triggers are just unavoidable, and you have to learn a new way to experience them! You have to have the power over that trigger and how you think about it.

I had to flip how I saw exercise too. I had used it as a way of purging, too. I took a perfectly healthy thing and warped and abused it just like I did food. You can live without exercise, but that’s not healthy. As I’ve blogged about before, my latest go around with a gym membership is the first time in my life that I’ve lost weight in a healthy way. I’ve maintained a healthy weight and lifestyle that included regular exercise, but I’ve never really lost this much weight before (still working on it) without disordered eating and exercise patterns.

It’s a new way of looking at food and exercise. Certainly, a significant change in my perspective happened during recovery, but what I’ve learned is those old ruts, that I wrote about yesterday (See https://pieces-of-me.com/2018/04/04/ruts/), have left some remains in my head. They are highly eroded for lack of use, but our memory is a crazy thing.

I can feel the flush of panic when I step on the scale on a weigh-in day, and in my mind, be that 22 year old who has just purged and is praying that the number has shrunk since I stepped on it 10 minutes ago! I can feel the resentment for this appliance having so much power over me. This is where we have to be intentional.

Nothing has power over me, unless I give it my power. Recovery, from anything, requires so much work. You’ll need all your power. Recognize your triggers, and learn how to flip them.

Take your power back from them.

“The most common way people give up their power is by thinking they don’t have any.” –Alice Walker, author of The Color Purple

Tell me what you thought Cancel reply